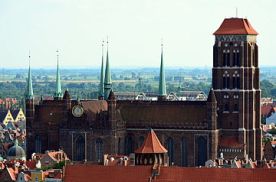 So we have World Youth Day in Gdańsk. Not only Kraków got lucky—Gdańsk did, too!

The pilgrims come on the 20th, and July 23rd is the momentous day when the official mass in the most prestigious cathedral of Gdańsk will be led by Archbishop Sławoj Leszek Głódź.

So who is this person who is going to speak to the youth of the world in the city of Solidarity?

Here are some useful tips:

He is known for drinking parties lasting long into the night, and other alcoholic excesses. To public knowledge, this appears to be the main reason he moved his headquarters from Oliwa Palace, picturesquely located in a historic park in the center of town, to a mansion, surrounded by a spacious garden, in the outskirts. Locally, he is called by the name of Flask. Obviously, not to his face.

Scandalous, but not to his parishioners. In fact, the drinking parties may even add to his popularity. He is an interesting case of a controlling alcoholic surrounded by men eager for free drinks. Usually, such a man is doomed to become insolvent and die a lonely death abandoned by his former spongers.

But this will never happen to the Archbishop. He is also the most influential and undoubtedly the richest man in town. As a former military bishop (his famous nickname obviously comes from his military times), he collects a military pension, of which a university professor could only dream, courtesy of our taxes.

When sober, he revels in humiliating his subordinates. Yes, he is one mean person. But since his people have chosen the path of sycophancy, they learn to bear it, perhaps wishing to stay close enough to inhale the fumes of his greatness.

This is just for starters. Let us proceed to less pleasant facts. For the Easter High Sunday celebration of 2015 in the Oliwa Cathedral he said that “legal regulations of same-sex unions would be the mockery of family,” in contrast with what such a family really needs, which is “respect, appreciation, and constitutional rights.” He may repeat something to this effect at the celebratory mass of World Youth Day.

In the same breath, he proceeded to call for his parishioners’ participation in the parliamentary and presidential elections in alignment with the teachings of John Paul II. Mingling into politics? But how else can a church representative take a moral stand.

And then, the girl. The girl was the victim. Her name was Zuzanna and she was 14; a country girl from a village of Mechów; the matter dragged since 2005. The priest was arrested for 5 months in 2008 but got out. He was then sentenced to 2.5 years in prison in 2012. He appealed. In January 2014, the Gdańsk court maintained the original sentence. His lawyers motioned for cassation, but this last resort appeal was rejected. He went into hiding. But he was eventually discovered and brought to prison in September 2014.

For all this time the priest enjoyed the protection of his Archbishop and other priests. At some point, he resided in Chwaszczyno, where his bio read: “Educator of children and youth.”

Oh, but then, there was another girl. She was less lucky in terms of demanding justice because she was just passed 15 when things happened. (Because the law here treats 15 year olds as consenting adults, in terms of sexual conduct. Although they cannot visit a gynecologist on their own. Never mind.)

So she was treated by the court as an adult. The matter dragged in various courts since 2001. The Archbishop went on moving this priest, whose specialty is religious instruction to youth, from one parish to another, too. Finally, the court ended its proceedings in August 2011.

So in 2011, after 10 years, this priest, whose name is Mirosław, received a 4-year suspended sentence, a 2-year injunction from teaching religion to minors, and a ridiculously low 2,000 zł ($600) fine. He’s still around and believes in his own innocence. This was a bad girl, he says.

Who knows, dear international pilgrims, perhaps you will see one of the Archbishop’s protégés at the celebratory mass of World Youth Day. Or perhaps you’ll feel him, standing right next to you.

Just don’t ask the Archbishop any uncouth questions, such as: How could this be? Don’t you know how demoralizing your actions have been? Don’t you have any shame? No conscience? He’ll tell you what he told us in November 2013: “In the church it is us who decide what must be, not you.”

And if you dare to ask the Archbishop how many more of such incidents there were, since you already know about Zuzanna and Ola, if you dare wonder if there were more offenses, some that didn’t see the light of day, he will tell you: “We don’t tell journalists what we do in the church.” This is what he told us in November 2013. Ah, and Pope Francis’s spokesman called it “the Polish affair,” the local matter.

The archbishop was moved to Gdańsk in 2008 by Benedict XVI. There were protests in the city. No one paid any heed.

Ah, and we pay for these festivities. I pay for World Youth Day. From my taxes.

So iron up your Sunday best and get ready, dear pilgrims. Ah, and when you hear the Archbishop using the word “trash” know that he actually refers to people. But surely, he would never call you trash. He says that only about the people who remain uncharmed by his gallivanting and his bullying. About the lesser people, that is.